The T-SQL language provides us with the @@ROWCOUNT system variable. This variable returns the number of rows affected by the last executed statement in the batch. In this tip, we’ll demonstrate how to use this variable and point out some caveats.

The usage of the variable is straight forward. You simply select if after the statement you wish to check as shown below: 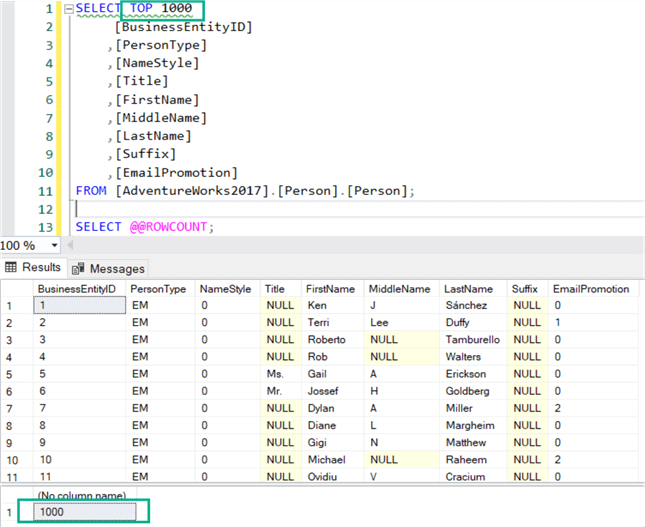 The statement can be anything that affects rows: SELECT, INSERT, UPDATE, DELETE and so on. It’s important that @@ROWCOUNT is called in the same execution as the previous query.

Suppose I would run the SELECT statement first from the previous example, and then run SELECT @@ROWCOUNT separately. This will return 1 instead of 1,000 as shown below:

This is because executing SELECT @@ROWCOUNT by itself returns 1. If you open a new query window (and thus a new session) and you fetch @@ROWCOUNT, the value of 1 will be returned: 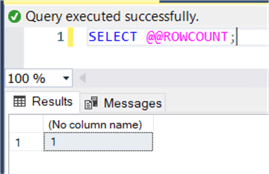 Typically, @@ROWCOUNT is used for error handling or for checking a business rule. You can access @@ROWCOUNT like any other variable in an IF statement. For example: 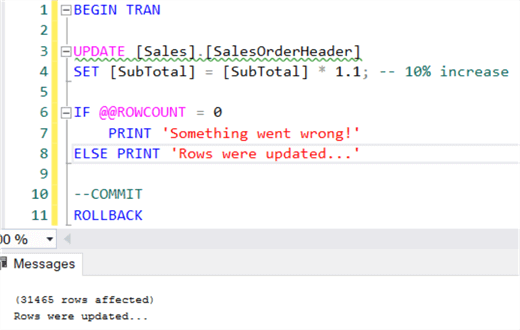 In this script, we perform an UPDATE statement. After the statement is done, we check if any rows were updated at all. If not, a message will be printed. In reality, you can take other actions such as throwing an error message with RAISERROR, send an e-mail or kick of some stored procedure. The transaction is used in the example to roll back the update, so we don’t mess with our sample database.

Here’s the script if you want to run it yourself:

The data type of @@ROWCOUNT is integer. In the cases where a higher number of rows are affected than an integer can handle (meaning more than 2,147,483,647 rows!), you need to use the ROWCOUNT_BIG function. This function returns the data type bigint.

Here is an example of how to use this function: 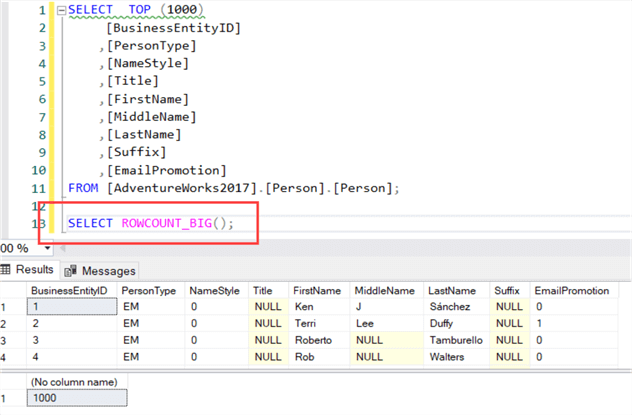 Sometimes it can be a bit confusing as what the last executed statement will be. Take the following script for example:

What will @@ROWCOUNT return if the catch block isn’t executed? What if it is? Let’s try executing the query: 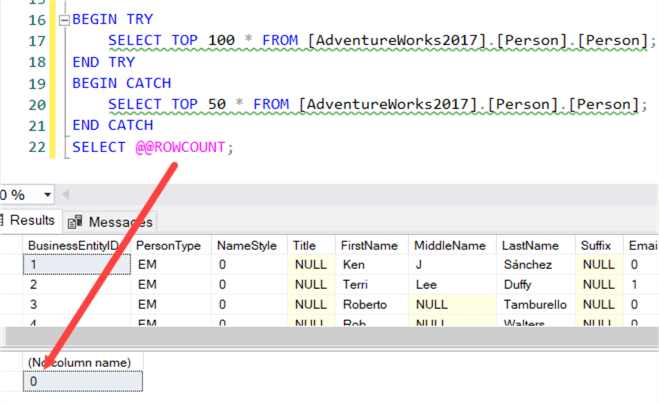 To avoid this kind of scenario, you can store the row count in a local variable. The script would then look like this:

Although the name, SET ROWCOUNT is very similar, it doesn’t impact @@ROWCOUNT directly. SET ROWCOUNT simply tells SQL Server to stop processing a query after the specified number of rows have been returned, which makes it kind of a “global TOP clause”.

In the following example, we’re limiting the rows to 500. The SELECT query itself should return 1,000 rows, but as you can see @@ROWCOUNT tells us only 500 were returned. 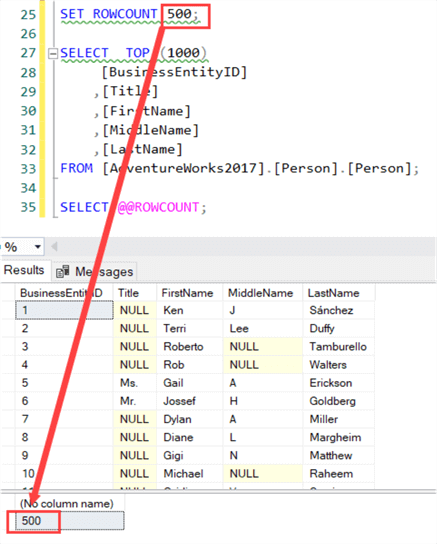 SET NOCOUNT ON also doesn’t affect @@ROWCOUNT. SET NOCOUNT tells SQL Server to stop displaying the message with the number of rows affected by a query. However, @@ROWCOUNT is still updated.

Let’s illustrate with an example. First the default configuration where NOCOUNT is off.

When we set NOCOUNT to ON, the Messages tab will not display the value. 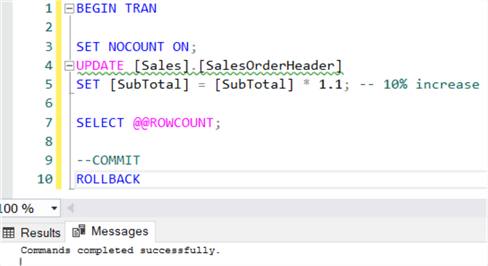 If we look at the Results, the row count however is still correct. 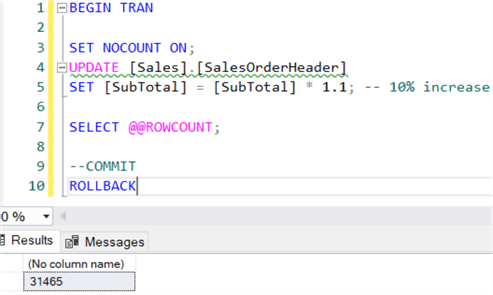 The MERGE statement is a bit special, as it can perform insert, updates and deletes at the same time. What does @@ROWCOUNT return in such a case? Let’s try it out. 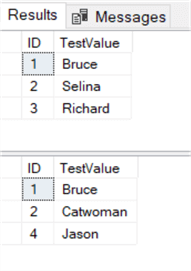 When the statement is executed, @@ROWCOUNT will return the value 3. 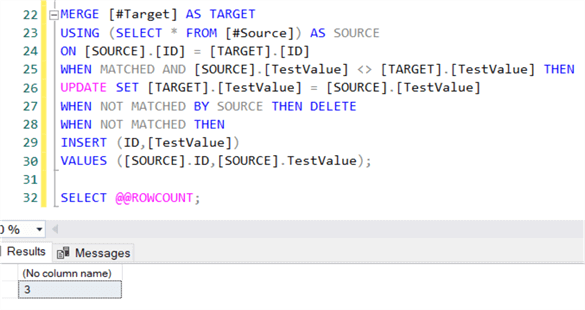 @@ROWCOUNT returns the total number rows affected by the MERGE statement which is correct, but this might make debugging or troubleshooting a bit more difficult, since you do not know how many rows were deleted, updated or inserted.

A possible work around is to include the OUTPUT clause.

First, we need to create a logging table:

We need to reset the data to rerun the example, so run the script above that creates the temporary tables and inserts the sample data.

Then we append the OUTPUT clause to the MERGE statement and insert the results into the logging table.

After the MERGE statement has been executed, we can inspect the results in the logging table:

We now have a detailed view of what the MERGE statement has done.

I Want To Upgrade Windows 7, But I'm Scared To Lose My Programs ... See MoreSee Less

I Want To Upgrade Windows 7, But I'm Scared To Lose My Programs

Sonos has filed a lawsuit claiming Google stole patents related to how speakers communicate with each other.
View on Facebook
·Share

Making use of Accelerated Mobile Pages (AMP) technology is easy if you're using WordPress. Here are 9 of the best AMP plugins for WordPress.
View on Facebook
·Share

How to use God Mode in Windows 10 ... See MoreSee Less

How to use God Mode in Windows 10